Let Artificial Intelligence find the right partner for you!

Matchmaking since ancient days has been a major concern, especially in a country like India, where about 75 per cent of people get hitched socially. A major hiccup in the system is the compatibility factor.

Pawan Gupta and his friend Rahul Namdev decided to fix this uncertainty. They took a leap and designed a website that uses Artificial Intelligence(AI) to find the right partner with desired compatibility for individuals. In a candid chat with Gairika Mitra, Pawan reveals the secret to connecting hearts. Read on!

Namdev and Gupta are degree holders from MIT, USA. The duo shared a common room during their college days, today they share a common office space. They were looking forward to finding their own partners, and had signed up on various matrimonial sites. 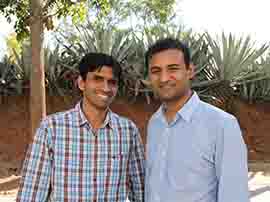 Going ahead, they realised that there was a major glitch in the system. And usually the barrier was the wavelength. “Also, we found out that most of the information provided in these matrimonial sites weren’t genuine. This is when the idea popped up. We decided to build a platform for matchmaking where compatibility would be of utmost importance,” says Gupta.

Betterhalf provides a unique combination of a targeted subset of matches with a quick turnaround time to find compatible partners. The platform provides verified matches with professionals working at companies like Google, Facebook, Amazon, LinkedIn, Adobe, and Accenture to name a few.

“Private ratings and feedback by users, in addition to our authentication programme, help filter out non-serious and creepy daters off the platform,” Pawan says. The user completes the registration and fills information on different dimensions; after that, they can view their profile with a focus on verification and the six-relationship dimensions.

After this, the user sees matches with overall compatibility percentages. The user can send a connect request to matches and can chat with the person once requests are accepted.

Betterhalf.ai has received a pre-series funding of 300K USD from The Indus Entrepreneurs(TiE). They wish to raise more funds in the near future. Currently, the site receives about 1000 users per day. The growth has been emulating by 100 per cent every week.

The duo have plans to properly structure and build a database of millions of married couples with the relationship data provided. “The partner prediction capability — the world’s largest invention of its kind — based on advanced usage of machine learning/artificial intelligence will take the anxiety away from 500 million people. This will change the future of the partner search journey forever,” Pawan concludes.

These techies showed us that time played the little ‘Cupid’ for them. As per the words of a famous author, "Do it now. Sometimes ‘later’ becomes ‘never’!”

Do you have a similar story to share? We are available at gairika.m@digital-guru.in.