This startup ensures one a greener ride at affordable rates. Read this!

Mobycy – India’s first dockless bicycle ride sharing app aims to make India a greener and a fitter cycling nation. This startup requires its users to just pick up a bicycle by scanning a QR code through the app, then ride and park it sensibly anywhere.

Talking to Gairika Mitra, founder Akash Gupta tells us about his entrepreneurial expedition. Some edited excerpts:

The idea for starting Mobycy struck Akash when he was talking to a bunch of college students during a guest lecture. Students in Indian colleges spend almost an hour or two, walking everywhere, whether to reach their academic block, hostel or the main gate.

“Using Mobycy, they can do the same via shared bicycles available at hourly rental, and upon completion of short commutes, then park the bikes anywhere for others to use”, says the founder, Akash Gupta. He has been eager to extend this idea to Indian cities where the problem is similar and larger, with regards to hassled short-mile connectivity, rising levels of pollution and traffic congestion on roads.

“With Mobycy, we are inspired to offer a better, faster and affordable way to reach last mile distances in India. People spend nearly 60 percent or more of their time and money to cover shorter, last-mile distances. With Mobycy, they can cover these short distances by anytime-anywhere available bicycles at just Re.1 per hour with our subscription plan on our easy to use app.” 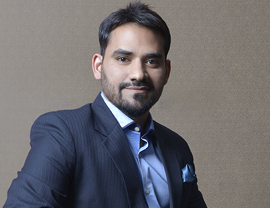 Unlike other bicycle sharing systems, Mobycy bikes need not be picked from or parked at docking stations. They have entered into long term associations with tech parks, government bodies, metro companies and private corporates. “So all in all, what differentiates us from others is the hunger in our belly and focus on razor-sharp execution to create a business rather than just place bikes in the market, which other companies have done worldwide.”

The founders had invested Rs.25 lacs when they first kickstarted. Then they bought a few cycles and went to China for a complete understanding on how such a concept is a huge success there, along with how it can be tweaked from an Indian market perspective. All of this gave Akash the confidence to quit his high paying job as VP Marketing in a reputed Fintech company in India and start Mobycy. Along the road, the company found their angel investors from the US, who invested $250k into the company during ideation stage.

A Piece of Advice

“My only advice for aspiring entrepreneurs is to not take their time for granted; if they have an idea that could solve the problems faced by the world today, they should act on it fast. The world is progressing at a fast pace, and instead of languishing in self-doubts or not feeling ready, they should take the plunge.

Be part of the start-up community, don’t be afraid to share your ideas and get valuable feedback from trusted sources; the exercise will only help them expand their perspective and launch a service that would serve the needs of varied demographics. Other very important attribute which I truly rely on is optimism and hard work. These two virtues will always separate you from others and will make you a winner.”

If you feel the urge to do it, do it now! For more such inspiring stories, stay tuned to IAAE.