A Startup That ‘Brands’ in Full Bahubali Style!

This startup specialises in branding, where characters like Kattappa and Bahubali entice conversations. Read this!

‘A lot can happen over coffee’... The catch-line seemed to work wonders for this husband-wife duo. And they stepped into paper cup advertising, a genre that is still untapped in India. Meet Deepak and Devleena Bansal, founders, GingerCup, who have redefined and re-packaged branding.

In a quick conversation with Gairika Mitra, Deepak tells us how he diagnosed advertising from a different perspective.

Why would paper cup advertising work in India?

India is the second largest producer of tea in the world, after China. Tea has been a hefty contributor and a tickler among all sections of the society. Deepak had to frequently travel overseas owing to his professional commitments and noticed that designer paper cups were being used widely. That’s how the idea generated.

People usually engage in informal conversations during short ‘chai breaks’. When they see the logo of a particular brand printed on the cup, more often than not they end up talking about it. It kind of plays on their psyche and a subtle connect is built. This form of advertising is kind of a trend-setter and directly connects with the soul. 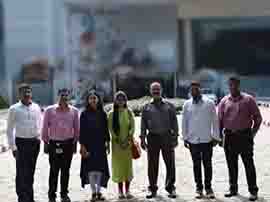 GingerCup is a pure B2B model, targeting companies working in advertising, which follow a B2C model.

They have their presence felt across metros and wish to step in the Tier II and Tier III cities soon.

GingerCup caters to brands like Uber, Brigade group, Hotstar, Bahubali 1 and 2, Colours, Yumist, and Indoor Football League(IFL) - Delhi dynamo team. They are striving to get other reputed brands on board soon.

They have networked with over 800 companies and nearly 1100 colleges pan India. It also has tie-ups with some domestic and international airlines. Last fiscal year, they generated a revenue of INR. 5 crore and are quite optimistic to up the number game this fiscal year.

“Today, they tell me how vibrant and colourful their ‘chai time’ conversations have become. Time and again, we have been approached by the HRs of reputed firms to consider this exposure as a recreational activity”, concludes Bansal.

This was the inspirational story of a couple breaking stereotypes to achieve entrepreneurial success.

We would be more than happy to hear about your inspirational expeditions too. Give us a buzz at gairika.m@digital-guru.in.